This year’s Refugee Week is an invitation to come together with others to make new connections and create real change. 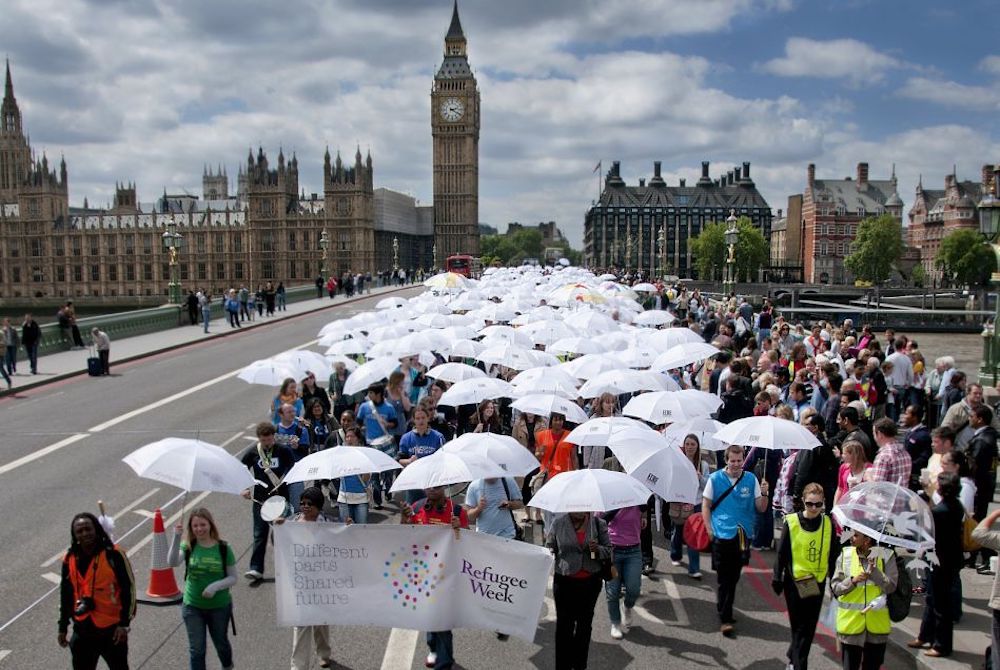 This year’s Refugee Week being celebrated across the UK holds a powerful challenge. The theme, We Cannot Walk Alone, is taken from Martin Luther King’s famous ‘I have a dream’ speech when he reminds the white members of the crowd that ‘their freedom is inextricably bound to our freedom.’

When one group is oppressed, where inequality exists – campaigning for change must continue, until we are all free.

In an article in The Mirror last week, Marie-Lyse Numuhoza, who escaped the Rwandan genocide as a child and sought refuge in the UK likened the theme of this year’s festival to the African concept of Ubuntu – ‘a belief which expresses how we are all connected and can’t be ourselves without others.’

This year’s festival is an invitation to reach across divides and differences to see where we can discover new connections, find space to work together and create stronger, more cohesive communities.

Powerful, progressive movements require coalitions formed from many spheres of society. A whole range of people who may not agree on everything but who unite with a shared passion around an issue. Campaigns often only really take off when they start to speak beyond the base of those who might usually be supportive, when they begin to reach the middle ground.

This means if we are serious about making an impact with our campaigns, we must attract, draw in and ultimately work with people who are outside of our usual circles. We have to step out of the echo chamber and find new persuasive ways to communicate.

Words to Win By

In the podcast, Words to Win By, communications researcher and campaign advisor Anat Shenker, delves into campaigns which have led to significant public and political shifts around the world. In one episode, she looks at how the narrative around people seeking asylum in Australia shifted through careful messaging, particularly with the #KidsOffNauru campaign.

In an environment where the majority of Australians broadly agreed with the government’s draconian approach to asylum and offshore detention, the lead campaigners made an active decision to focus their messaging on people’s shared values and humanity using statements the majority could agree with, such as: ‘No matter our differences, most of us believe that all people deserve to live in peace.’

They drew the audience’s attention to images of families and children and spoke about people’s dreams and aspirations. In one instance, using a case study of an Iranian family who spoke about their love of Beyoncé. The intention was always to make the audience consider the similarities rather than the differences that existed, which was particularly important in a debate which had previously centred around ‘othering’.

The impact of this campaign was a law which passed preventing children being sent to offshore detention centres, and the Medevac Bill, which ensured those detained received medical treatment. While many of the strict approaches to asylum are still implemented in Australia – there has been a huge shift in public opinion.

Crucially, the campaigners knew they had to reach beyond their usual base, so they used language which connected with a wider audience, particularly the audience in the middle who could be persuaded to become supporters. This meant broadening the messaging – and in some respects making it more inclusive, so more people could buy into it.

It’s a technique which can at times feel compromised and awkward, particularly when tackling huge issues of injustice – such as the UK government’s current unfair and oppressive immigration policy.

Yet, the phrase ‘we cannot walk alone’ is in part a declaration, as Dr. King intended, that real, long-lasting change can only happen when we come together. We must reach beyond our own networks and alliances, step into difficult, even unknown territory and work with those who don’t necessarily think exactly the same as us on every issue. It requires commitment and courage; our language may need to be altered and messaging pitched in a new way. Our campaigns will look different, but if we are serious about shifting public and political opinion, this tactic is essential.

We must find the universal values we share, the common humanity and call others to join us on the road to peace and justice.